Blizzard belongs to Tundrathesnowpup- also known as Musicalmutt2 on deviantart

Blizzard is the first born of Snowdrop and Glacier, born a few hours before his sister Tundra and has always just been a bigger boy since birth. While the two got along as babies, once Blizzard was adopted by Duncan, he began to mimic the boy's behavior and began to bully other pups as he got older, especially Tundra once he ran into her on the streets on a walk with Duncan. He was surprised at first to see his sister on the streets since he hadn't seen her in 6 months, but also began to tease her when Duncan commented about how dirty and scrawny she was and that he clearly chose the better pup. Duncan's praises went to Blizzard's head and his ego grew along with his rude attitude. Because Duncan's mother ran dog shows, Blizzard was entered in as soon as he was old enough at 1 year old, and soaked up the compliments and praises of the judges, further fueling his fire to pick on Tundra for not being "show dog" worthy.

At 2 years old, Blizzard found himself on Jake's mountain one December day with Duncan and the family, celebrating the opening of the slopes for the first day of the season. Blizzard was chucking snowballs at Tundra and being an overall pain in the butt towards his sister, as usual. As the two bickered, an avalanche began to rumble against the mountain and veered straight towards the pups. He managed to hide under a ledge sticking out from the mountain side, but some icicles fell and trapped him in the crevice. He reluctantly barked and yelped for help- his paws too cold to dig against the thick ice. He noticed that the PAW patrol came to help him, not sure which pups; since the ice was blurring his view, but he was relieved seeing the ice being chipped away. Once the ice was gone, he got angry. He saw Tundra, holding a big, sharp stick in her jaws while the rest of the PAW patrol was out checking if anyone was hurt or trapped. He growled, angry to have been saved by his younger sister. what made his blood boil more was the fact that the PAW patrol actually wanted her to JOIN. Her? a RUNT? Ridiculous! He holds a serious grudge and is extremely jealous of Tundra since this incident, being incredibly hostile and intimidating towards her whenever he sees her, trying to make her look bad in front of the team; but always somehow getting himself into trouble or making himself look like the fool.

When he is older, he mellows out a bit and tries to be a bit more tolerant- even finds a mate named Avalanche and they have three pups- adopting in a fourth. Blizzard is a lot more brotherly, and even has a good relationship with Tundra now, trying to make up for the years he spent being a major pain in the tail. Though he's still not as keen on her mate and some of the other boys on the PAW Patrol, he tolerates them as best he can.

A gray and white husky with ice blue eyes, dark gray paw markings and black collar with a golden plate with his name etched inside.  When he gets married to Avalanche, He gets a golden "A" with a small engraving of two paw prints on the side

Blizzard is a rather cocky and egotistical pup. He does whatever he wants and doesn't care who he steps on to get his way or to win. He is incredibly snarky and rude with a temper problem to boot, Blizzard is incredibly hot-headed and will often result to yelling and kicking objects when he is confronted with negative emotions, unsure how to properly handle them. As he grows older and gets his fluffy rear handed to him by life, he starts to mellow out and tries to curb his anger and temper issues. He is still on the grumpy side and it can be hard to break through his shell, but he's really trying to be a better dog.

Stories he appears in

Stories by me not fitting with storyline:

Collaboration stories with other users: 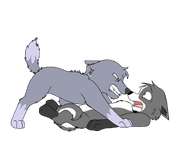 gettting pinned by Rocky after taking his pups

Gift from XxPastaWolfiArtistxX on Deviantart

Gift by DJ-Doxie on Deviantart "What could have been"

an old sketch I did back a lotta months ago (during like the beginning of Like Champ Like Son) that i didn't color yet, but Gman wanted Rocky punching Blizzard and knocking him out while Tundra cheered

Awesome gift from Mackie!! So many badges! :0 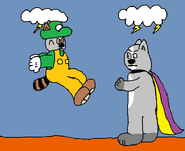 Rocky vs Blizzard drawn by Jon 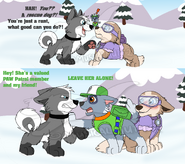 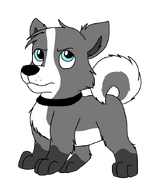 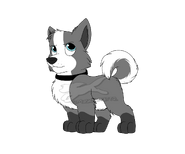 Blizzard was a nominee for the wiki awards
Community content is available under CC-BY-SA unless otherwise noted.
Advertisement