Huck was still a little puppy when he was put into a shelter. For awhile he was passed from home to home until finally he settled down with a family. His adoptive older brother was Carver. Huck was quite excited to have an older brother, but soon he realized that being Carver's little brother was nothing but teasing and torment. He was always getting called names like "Big ears" or "mutt". When ever he saw his brother bullying he did his best to stop it, though usually it resulted in him getting pushed out of the way. Whenever the poor pup tried making friends, Carver would spread rumors about Huck making all his friends run away from him. He hopes someday he'll make friends and his brother will leave him alone.

Huck is distant from the rest of the pups and would rather be on his own. Though when he meets someone he likes he can be bubbly and bouncy. He's very sensitive about the size of his ears and will often lower them against his face.

Huck is younger than the paw patrol pups and is a German Shepherd Samoyed mix. He is tan with a white muzzle, white socks and a white curled tail. He has dark brown ears which are quite large (hence the nickname)

he is scared of crabs and wasps

His full name is Huckleberry Finn (don't judge me XD)

After awhile Huck begins to play with Fletcher. Soon he asked to become his trainee and he gladly accepts.

When he reaches his teen years Huck starts to have feelings for Fletcher's little sister, Harper, unfortunately for him her brothers don't really approve And Fletcher feels "betrayed" by his trainee. After awhile they mellow out, but Fletcher's still a bit wary.

Huck with his trainer, Fletcher 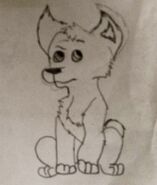 Huck being teased by his adopted brother, Carver

Hucks pup tag~ made by WittleFuzzyPuppehs 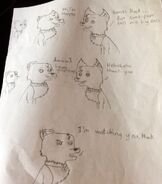 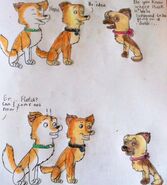 Huck with his "Hero" Fletcher x3 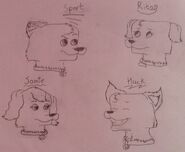 Huck in the bottom right corner!
Community content is available under CC-BY-SA unless otherwise noted.
Advertisement