Icee is Tundra's younger half-sister: born after Tundra's father, Glacier, met a female wolf a few months after the death of his first wife.

Icee had heard about Tundra and the PAW patrol when she was young, and she wanted to become just like her. She had known she had a brother and sister named Tundra and Blizzard from Glacier, who would talk about them in his sleep. When Icee finally met Tundra, she was ecstatic. Icee constantly follows Tundra around-  and Tundra takes her in as an apprentice- teaching her about ice rescues, just in case Ryder needs a pup and Tundra isn't available.

Icee tends to like everybody in adventure bay, but Alex gets on her mean side very often. when Icee first met Blizzard, She wanted to make friends with him really badly but then realizes that Blizzard is a bully and never speaks to him until he makes it up to them in their adult years.

Her "mean side" is when she says things she doesn't mean and sometimes hurts peoples feelings. So she tries to stay happy all the time because she doesn't wanna lose the things she has now, like friends and people that care about her.

Icee doesn't like to wear dresses or get all pretty that often, even the boys would call her Lil' bro even though she's not that younger than them. Icee loves to help out her friends whenever she can and she tends to keep it that way. when Icee gets older, she acts more loving around her friends and Family, the boys call her "Ice" and still call her "Lil Bro" when she's older. She calls the boys her "bros" and the girls her "sisters" even though she's only related to Tundra,Everest,Lillian , and Sport.

She can get really snappy and possibly physical if others make her really mad, so the pups try not to make her really mad at all. But Ruby, a bully from her past, can get her mad at times. If she's mad she sometimes cries in frustration or takes things into her own paws

Icee is a gray and white wolf-husky mix with light pastel blue eyes and badge, along with a light turquoise collar. Her front paws have longer white socks, while her back paws are just white on her toes. She has a white marking on her muzzle and belly, as well as her ear tips and under-tail. Her ears are a darker gray. Her uniform has dark turquoise goggles along with a light turquoise coat and even though she's supposed to be Tundra's Apprentice, her backpack has more tools than Tundra, Tundra gets these tools after Icee for her upgrade, she has mini heaters and some blankets that are very small when rolled up, but when they unravel, the blankets are full size, hot chocolate or soup like Cooper, and if someone's trapped in some Ice, she has a megaphone like Chase but it's only for breaking things like Ice, Glass etc. When she's older, she wears a golden version of Andrew's badge with a little diamond crested A attached to it to represent their marriage

"Let's Mush to the rescue!"

"Snow can't stop this pup from a rescue!"

"If it's night or day, I'm always ready to plow the snow away!"

has a crush on a pup named Andrew - but she calls him "Scout" as a special nickname and later on marries him and have 4 pups- Cameron , Slushie , Snowcone , and Andrea

Icee doesn't think she has that many friends, she thinks she only has the PAW Patrol, Ryder, Katie, and Jake. She would technically call Alex her friend but then she would get mad at him or yell at him for not following safety rules and make her go all the way out somewhere just because he barely cares about his safety and does things without supervision. But she's also close to her sister Tundra and she makes a new friend later on, Fluffy and she's super close to Mindy, Kailey, Smoky, and Angel though she treats Fletcher like an older brother though they cause some trouble but her and other mentors don't like how Fletcher rubs off on her and other pups.

Icee knows she has Tundra and Blizzard as her older half siblings but she didn't know she has 3 other cousins than the one that works in the PAW Patrol too because she was never around her mom long enough to know that. Lillian (or Lilly for short, she knows this one because she's the nature pup), Tulip, Sun, and Moon. She knows she has an older brother named Bleu, her younger twin sister Snowy and her Mother Sapphire.

Pups Hunt down a Runt!

Pups have an "Icee" day (kinda, Tundrathesnowpup made this page for me because I messed up the first title)

Andrew and Icee in: the Lovely Crystal Rose

Pups and the Ice Ice Puppies

Creepypasta *not a part of canon storyline*: 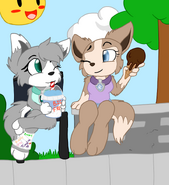 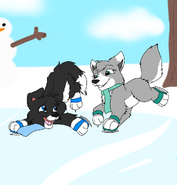 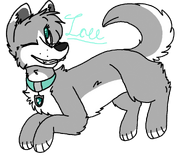 Icee by AxelPUP101 on deviantart

Icee and Auntie Tundra with Icee's pups, Andrea and Cameron Made by AxelPUP101

Request from Chihiros-Code, Icee and Tundra I love it~ :3 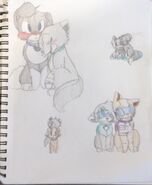 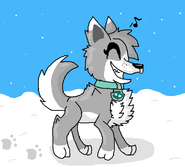 made with ms paint icee and tundra

Icee Ref made with MS Paint

edited screenshot with MS Paint- Icee in her uniform 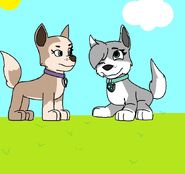 Icee's badge- made by Marielita48 on the wiki, I love it so much! Thank you!

A Birthday Gift for Tundra and Cooper! Drawn by Cooperonice/AxelPUP101

Part of an Art Trade with IceWolf2122! Playdate with Slushie and Winter~!
Say i do wip by pokemonluvergirl2-d89bh81.png
Icee the Flower Girl~! <3 <3 (WIP by Tundrathesnowpup)

Adorable gift from WittleFuzzyPuppehs~ Snow puppies- I added this a bit late sorry ;u;

Screenshot Edit, done and added by Confetii the party pup

A Sketch Dump of Auntie Icee and her relationship with Tundra and Rocky's pups, the first sketch is Icee letting Winter ride on her head while she grabs Aurora by the scruff, she just picked Aurora up I think? I dunno- second one is Sage and Icee having some Aunt and Nephew bonding, Third is Pregnant Icee and singing while Winter rides on her head (again) Final sketch, Icee, Sage, and Aurora protecting Winter from something and Icee giving it her soul melting glare? I just dunno anymore (missed some details, sorryyyy QAQ)

Another gift from Puppy~! <3

Icons I did a while back~! The Main 6 Pups with OCs: Tundra, Cooper, Nighty, Andrew, Smoky, Kailey, (an OC I forgot to make a page for) Sunburst, Icee, Blizzard, Kyla, Princess, Snowy, and Bleu (Only the owners of the OCs can use the icons of their OCs)

Tundra and Icee drawn by Tundrathesnowpup 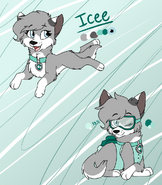 Another collab between Morgan and Raeven- Raeven sketched it and Morgan colored it
Add a photo to this gallery
Retrieved from "https://paw-patrol-fanon.fandom.com/wiki/Icee?oldid=669784"
Community content is available under CC-BY-SA unless otherwise noted.