Smoky and Kailey's three future pups: Trapper, the oldest boy pup, his little sister Faith, and their little brother Dodge. Trapper dreams of someday becoming a police pup like his dad and Faith, who heard about Bandit's "Stray Pup Sanctuary", dreams of taking over the sanctuary and helping pups who don't have a home. Dodge becomes a crossing guard when he's older.

Trapper likes to tease his little sister by hiding her toys, but usually confesses the location of the toy when Faith tickles his belly. All three pups look up to their bigger cousins (Sage, Aurora, and Winter) and try to tag along with them when they go out to play. Trapper likes to have guy time with Smoky and Rocky whereas Faith likes to just play with her toys and hang with her mom. Dodge is born in Smoky's New Addition.

Trapper: a dark gray pup like his dad but has wavy fur like his mom with dark blue eyes. His paws and belly are white. He was given an orange collar by Ryder for his birthday. When he becomes a trainee, his badge has a police siren and a periwinkle background.

Faith: a dark brown pup with her father's green eyes, and wavy fur on her floppy ears like her mother, but the rest of her fur is smooth like Smoky's. Her paws and belly are also white. She was given a light blue collar from Ryder for her birthday with a light pink heart license.

Dodge: a muddy brownish-gray pup with light hazel eyes. Like his older siblings, his paws and belly are white. He looks similar to his Uncle Rocky in body structure and facial tufts. For his birthday, Ryder gave him a red collar. He wears a hearing aid in his right ear because a few weeks after birth, Smoky finds out that Dodge is deaf but can hear a tiny bit out of his right ear. Dodge usually wears a notebook on a string around his neck,or kept close by, so that the other pups will be able to communicate with him

Trapper: Trapper is an adventurer. He loves to roam around Adventure Bay with the other pups and tends to stick his nose wherever he can. Whenever his dad or Uncle Rocky go on adventures, he tries to tag along. If he's too small to go with them, he'll go adventuring with his cousins instead. He loves being tickled and Faith uses it against him when he hides her toys. He is a very kind and playful pup, always wanting to play and run around.

Faith: Faith is pretty shy at times, and loves playing with her toys. Her favorite game is fetch, and while she loves playing with the other pups, she is afraid to leave the area around the Lookout sometimes unless one of her parents or her aunts and uncles comes with her. Her goal in life is to help other pups who are homeless- and she achieves her dream when she moves out as an adult to help out at the Stray Pup Sanctuary. When she's not shy, she's a sweet little puppy that loves to hang out with her older cousins and play games.

Dodge: Dodge is a pup who always wants to play with his older siblings and cousins. He is always full of energy and wants to hang around the older pups no matter what they're doing. He's extremely excitable and doesn't let being deaf deter him from trying to make new friends and help his friends and family out with whatever task they're doing. He's very goofy and hyperactive, a heart of gold beats inside of that furry chest.

Young: Keith Mitchell-Voice of young Tod in Fox and the Hound

Young: Judith Barsi-Voice of Anne Marie in All Dogs Go to Heaven

Young: Collin Dean- Voice of Greg from Over the Garden Wall

Creepypasta Wiki (All stories there are non-canon):

Trapper: Trapper is terrified of the vet like his cousin Sage

Faith: Like her mother, she's a little scared of Wally. It might just be because of his size and his tusks, she just feels really nervous around him since he scared her when Kailey first took her on a hovercraft ride

Dodge: Dodge is scared of cats like his Uncle Rayne

Trapper: Trapper trains under his dad and chase on how to be a police pup. His favorite thing to do is turn on his dad's siren when he rides in his police truck. He reminds Chase of Smoky when he was a police pup trainee. Once Bandit's son Bounty is old enough, Trapper takes him under his wing as his trainee.

Faith: Faith's mentor is Bandit. Growing up, she heard stories about all Bandit does for strays at the "Stray Pup Sanctuary" and eagerly helps him out there whenever possible. Her favorite thing to do is feed the little strays that stay there.

Dodge: Dodge's mentor is more of an inspirational mentor. He looks up to his Uncle Rayne since his uncle had to overcome being partially blind in order to survive on the streets. Rayne always tries to instill confidence in his nephew when Dodge feels down about his disability.

For his job as a crossing guard pup, Dodge's mentor is Vinnie. Vinnie taught Dodge how to do the job when he decided to try and get a job to prove he can work despite his disability.

Relationship with their Cousins:

Trapper and Faith love to hang out with their cousins. They look up to them. Their favorite game to play with their cousins is "Copypup" (Copycat game). This gets on the nerves of Sage and Aurora as it seems like that's all they want to do. Winter finds their little game adorable. Dodge is close with his cousins, but due to the age difference, doesn't get to hang out with them very much since they're usually training on missions. He still loves his cousins and looks up to them like his older brother and sister.

Trapper, Faith, and Dodge love their little cousins. Trapper loves to play fetch with Smoky Jr. Faith, Sphinx, and Skky love to have races around the Lookout with Faith usually winning. Dodge likes to wrestle with Dustball.

More family to be added soon 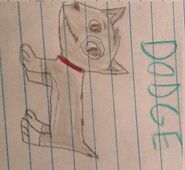 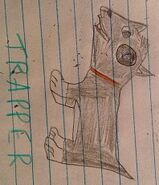 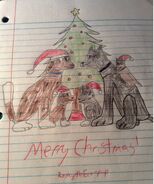 Merry Christmas from Smoky, Kailey, and the pups! ---drawn by RockytheEco-pup

Trapper and faith meeting their baby brother for the first time

Smoky takes a scared Trapper to the vet

Sage and Trapper heading to the park

Trapper, Faith, and their pups on Father's Day----Contest Entry by Sharleenthehealthpup

Trapper, Faith, and dodge having a Father's Day picnic with their parents and Barley's family------Contest Entry drawn by PitbullLover 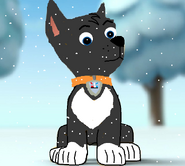 Trapper's Badge drawn by PitbullLover~!! I love it!

Trapper, Faith, and Dodge with their father Smoky. An awesome drawing by Aurychase! 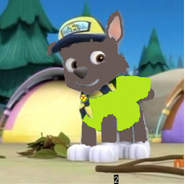 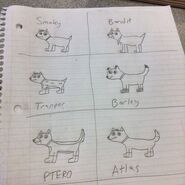 Trapper and a few of my OCs

A cute gift from Rain <3 Dodge and Sora playing together

Dodge, Ashes, Jackalope, and Moxie standing in front of their school's championship soccer trophy while in uniform------------Gift Art by ROCKYDOG13

Trapper and Faith as teens, Dodge is around preteen~ He'll get a little taller, but will stay shorter than his older brother and sister
Community content is available under CC-BY-SA unless otherwise noted.
Advertisement