PAW Patrol Fanon Wiki
Register
Don't have an account?
Sign In
Advertisement
in: Next Generation, Fanon, Fanon Characters,
and 13 more

Remedy and Marshall have a litter of 6 pups; First born was Mallow, then the twins; Aloe and Vera; came about 30 minutes later and were born within minutes of each other. An hour later came Valerian, Zorro and Jaiden. Zorro and Jaiden were rather small compared to their siblings, but still thrived.

Aloe wants to become a medical pup like her mother and Ace. Mallow becomes an eco-pup like his Uncle Rocky and Vera takes after her father and wants to become a fire rescue pup. Valerian doesn't particularly want a job and prefers to be a means of emotional support for his friends and family. Zorro decides to remain a civilian pup.

Mallow: A little more dalmatian in body type, with a little bit of fluff on his ears and the base of his tail. He has mainly dark charcoal markings on his back and his right ear is completely colored. He has freckles between his eyes and the bridge of his nose, which is a soft rose-pink color. his eyes are chocolate brown like his grandma Hayden. He wears a lilac-pink hued collar with a green badge that has a purple recycling symbol in the shape of a heart.

Aloe: More dalmatian in build with some fluff by the base of her tail, ears, and stomach as well as a small tuft at the top of her head. Her markings are a soft diluted orange and gray compared to her siblings' and parents. she has an orange marking covering the right side of her face and solid gray left ear with orange freckles between her eyes. Her front left paw has a solid orange sock marking, while the front right is gray and sits a bit higher upon her leg. She has several orange and black spots covering her body. She has soft blue eyes. Her collar is a soft denim blue with a baby blue tag. her badge is a white paw-print shaped in a heart with a Heart monitor spike etched through it.

Vera: Setter build like her mother with a spiky hair tuft and a rather fluffy tail. She mirrors her sister, Aloe's, markings with an orange marking covering the left side of her face and a solid black right ear with black freckles between her eyes. Her front left paw is solid black, while her right is orange and is littered with orange and black spots on most of her body. She has bright green eyes like her mother. Her collar is red with a yellow tag. Her badge is a bright red fire hydrant.

Valerian: A very fluffy replica of his mother, Val is covered in orange spots and has his father's blue eyes. His right ear is solid orange and his right front paw, and front back paw have longer sock markings. His left eye has a cloud-shaped patch over it as well as a large patch of orange over his tail. He wears a soft mint colored collar with a light seafoam "wave" through the middle. He has a golden star tag.

Zorro: Zorro has a setter build much like his mother and Remedy’s green eyes. He has a white coat with patches of Black and Tan markings on his face and down his back, with Black and Tan spots splattered all over him. He has fuzzy black ears and a fluffy coat like his mother. He has one Tan sock on his front right paw. He wears a green collar with a silver tag that has the letter “Z” engraved on it.

Jaiden: Jaiden is rather small than her siblings and parents. She has heterochromia; her left eye is a cerulean blue, while her left eyes is a pale green. She is covered in brown spots and has a black and pink spotted nose. Her collar is a pastel orange with a golden bone tag

Aloe: Calm, rational, and a bit on the quiet side, Aloe is the soothing voice of reason to match her sister's wild nature. While she likes to go along with her friends, she's often the mediator of the group alongside Ace and tries to make sure everyone gets along and calms down. When she speaks it's often in a soft voice, but she's very confident with herself and her words, she just prefers to be quiet and observant.

Vera: The opposite of her sister, Vera is the wild child who doesn't quite know what the word "rest" means. She doesn't really know how to control her volume and what comes out of her mouth, as she often says things that get her in trouble. She can be a bit cocky and self-absorbed sometimes, thinking she's the absolute best at sports or games, but she's fiercely loyal to her friends and family and tries her best to not be a sore loser. despite her hyperactive streak, Vera absolutely adores attention and affection and will eagerly calm down if it means getting a good cuddle session.

Mallow: Curious and loves to ask questions, Mallow is often following around his peers and trying to figure out what they're up to or how something works. He can be a bit oblivious to his surroundings at times, much like his father, and tends to find himself getting patched up a lot by his parents. He is incredibly sweet, but isn't the best at social cues and can be pretty clingy.

Valerian: Valerian tends to be more of a "go with the flow" kind of pup. He doesn't seem to worry about anything and has a very relaxed, laid-back personality type. He's rather sluggish and prefers to nap and meditate than to run around and adventure too much, but that doesn't mean he doesn't like a good game or two every now and again. He's incredibly compassionate and affectionate towards those he's close to. He exudes a very chill vibe that even his sister, Vera, finds herself calming down to when around him.

Zorro: Zorro is observant and very perceptive when it comes to emotions. He’s often able to tell how someone is feeling after a few minutes of watching them, if he knows they’re upset he does his best to comfort them, even if it isn’t one of his strong points. Zorro finds he’s better at distracting others from whatever is wrong with them and will engage them with tag or some other game. He’s a bit of a clean freak and doesn’t like being dirty or having dirt in the building. He’s a well organised pup and likes to have lists and schedules so he knows what he’s up to each day, he’s good at arts and crafts so more often than not his lists are extremely bedazzled.

Stories they appear in

Please do not ask because I am not actively looking for crushes for these pups. 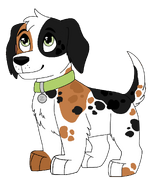 the full fam together :)
Community content is available under CC-BY-SA unless otherwise noted.
Advertisement