Camilla,Beth, and Dawson belong to Rebecca200613. Please do not edit them without my permission. Ask before using them in your story/songs. Thank you!

After a while Becca and Brock had three pups named Dawson, Beth, and Camilia. Dawson is the oldest and the only boy, then Beth is the second oldest, and then little Camilia who's the runt of the litter.

Dawson knew he wanted to be a firefighter like Marshall since he found his job really "cool". Beth knew she wanted to be a medic pup like her dad, since she loved helping him out when somepup in her family got hurt. Camilia on the other hand didn't really know what she wanted to be. She likes being outside and playing around with the wild animals but she also wants to help her mother with her role. After she thinks about it she decides to be an Environmental pup since she loves animals and the outside.

Dawson loves to hang out with his dad a lot and a lot of pups/people call him a daddy's boy. Camilia is a total mommy's girl and loves to be with her mother more than her daddy. Beth likes to be with both of her parents and send the same amount of time with both of them. All three of them love hanging out with their friends and cousins a lot. Dawson likes to hang out with Kevin alot since they're both trouble makers. He does like hanging out with everypup but he likes playing with Kevin more. Beth likes to hangout with Anna, Scilla,and Bambi a lot since they're really good friends. Camilia tends to hang out by herself more than running around with the other pups. She does this since she knows she small and she doesn't want to be told she can't do something.

Dawson: is mostly white with some black spots. He has black on his right ear, around his right eye, and a couple spots on his body as well. He has black socks on all four of his paws and on the tip of his tail. He has Envy colored eyes (they're a mix of Brock's and Sandie's eye colors). He wears a light red collar.

Beth: is mostly gray with Mercury color on her chest down to the underside of her stomach. She has black socks on her front paws and black on the tip of her tail. She also has Spray colored eyes and wears the same blue that her eyes are for her collar.

Stories they are in

Dawson: He would watch Marshall on missions so he could learn how to be a firepup on his own. Marshall started some training with just him since he always wanted to jump ahead.

Beth: She had her father teach her how to use her pup pack and everything. They had a ton of one on one time whenever they could. She found learning easy and picked everything up like a sponge. She could do everything she was taught and she started helping Brock out more. He would have her help any of the pups to test her. When she was able to do it all by herself she started going on missions.

Dawson: He has a crush on Ocean. He likes to pull pranks with her and later on has pups. Their names Loki, Murvin, Delta, Maya, and Medea.

Camilia: She said she would never have a crush until one day at the park. Blaze bumped into her and she told him he was cute. He asked her out on a date and she said yes. So they dated for three months and got married. She wanted to have a family so they had pups of their own.

Ocean and Dawson drawn by Busterlover. They are so cute! 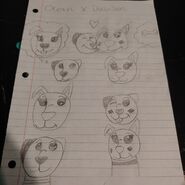 OceanXDawson by me. I think they're cute! 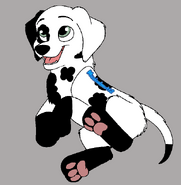 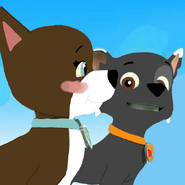 Screenshot edit: Camilia likes Blaze and has a crush on him.
Community content is available under CC-BY-SA unless otherwise noted.
Advertisement